Why is Norway one of the largest exporters of seafood? 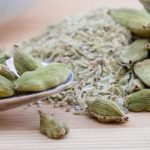